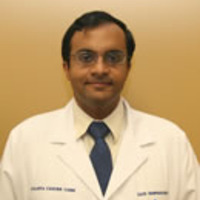 Dr Simpson joined Atlanta Cancer Care after completing his fellowship in Hematology and Medical Oncology at the Mayo Clinic in Rochester Minnesota. He has published numerous articles outlining his research in colorectal, genitourinary, hematologic cancers and melanoma. He has also presented extensively at the American Society of Clinical Oncology (ASCO), American Society of Hematology (ASH) and at the American Society of Bone Marrow Transplantation (ASBMT). Dr. Simpson focuses on getting the best results for his patient using the latest in evidence based medicine.

He maintains a deep respect for the emotional and physical needs of his patients and their families and strives to incorporate this aspect into his practice. Dr Simpson is a member of the the American Society of Clinical Oncology (ASCO), American Society of Hematology (ASH).

While not at work he enjoys spending time with his wife and son, playing tennis and testing his culinary skills.